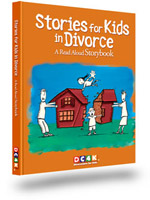 The read aloud stories are designed to connect children with other children who have feelings and experiences similar to theirs. There are no pictures in the read aloud storybook. Through their imagination and creative thinking, children can place themselves in the stories. They will empathize, laugh, and may even cry with the characters in these stories. As the children listen, they become active participants and learn practical ways to deal with their hurts and struggles.

Story time provides leaders an opportunity to develop lasting intimate friendships with the children in their group.

Each story complements the weekly DC4K session topics. They serve as an excellent tool to facilitate heartfelt conversations with the children in the group.

“Praise the Lord for stories in the storybook that help these children know that they can get through this hard time.”

My Parents Are Getting a Divorce? Not My Parents!

Jeremy and his sister Jamie were happy children. Jamie was finishing fourth grade, and next year she would be in fifth grade. She was growing up and couldn’t wait to be one of the older girls at her school. It would be fun when she became a school crossing guard. Oh just wait until her little brother wanted to cross the street. She would make him wait. Another thing she was looking forward to next year was enrolling in gymnastics. Her mother had told her for years that when she went into fifth grade, she would be able to take gymnastics.

Jeremy was going to be in second grade next year. Both were excited about their summer vacation. This summer their parents had promised to take them to Disneyland. For several years they had wanted to go to Disneyland, and now they were finally getting to go. Jamie was already planning what to pack in her new suitcase. She had never had her own suitcase before. Oh boy, this was going to be a fun summer and the best summer ever.

A week before they left for Disneyland, Jamie heard her mother and father fighting. She thought she had heard her parents fighting before, but it was always when they were in their bedroom late at night. This time it was the middle of the day, and there were loud and angry voices coming from the kitchen. Jamie could hear them all the way next door where she was playing with her best friend.

When her parents saw her come inside from playing, they got quiet. Dad looked at her mom with an angry look and said, “We’ll talk about this later,” and then he said to Jamie with a happy voice, “Hey JamieMamie, what’s up?” Her dad had called her JamieMamie ever since she could remember. But even though his voice sounded normal when he said her name, Jamie didn’t know what to think. What if they were fighting about taking her and Jeremy to Disneyland? What if they weren’t going to go to Disneyland? Suddenly Jamie felt very scared, and she didn’t know why she felt this way.

On the next Saturday Daddy loaded up the minivan, Jamie, Jeremy, and her mom, and off they went. They had a wonderful time at Disneyland. Daddy even told Jamie that he thought she was old enough to have her own camera. Not only did he buy her a camera, he even supplied her with several rolls of film. Mommy took pictures with her digital camera. She took several pictures of Daddy, and that seemed kind of strange to Jamie. But Jamie thought it was the best week she had ever had. Even her little brother, Jeremy, had been nice to everyone.

When they got home, Jamie decided to put together a memory scrapbook. She had watched her friend’s mom put one together, and she knew just which stickers she was going to buy and which album she wanted. Her mother thought it was a great idea. When she explained to her dad what she wanted to do, he didn’t seem very interested. Later that night she crept out of her room and down the hall to her parents’ bedroom. Sure enough, they were arguing again. She hated to think they were fighting; she preferred to think of her parents as arguing. As she listened to her parents, she realized they were talking about Daddy moving out of their house. He told her mom that she spent too much money and she was going to have to go and get a job because he was leaving. He even said something about her mom encouraging Jamie to spend a lot of money on silly things like a memory scrapbook. He said, “What on earth is a memory scrapbook anyway?”

So that was why her daddy was going to leave. It was Jamie’s fault her parents were fighting. The more Jamie listened, her head began to hurt and her stomach got a big knot right in the middle of it. Then she heard her dad say he was sleeping downstairs, and as she heard his feet walking toward the door, she ran to the safety of her room. As she sat behind the closed door in her room, tears began to fall. What could she do to keep her daddy from moving out? She loved her dad so much. What would Jeremy do without his dad around? She was afraid Jeremy would be really mad about Daddy leaving. She wasn’t mad, but she was … well … she was … hurting. It felt like there was a big hole in her heart. What if her heart was breaking in two? Was that possible? And what about her mom? What would her mom do? She didn’t have a job, and as far as Jamie could remember, her mother had never had a job before. She began to pray, Oh God, please don’t let my daddy move. Please God! Make him change his mind. Please.

The next morning at breakfast …